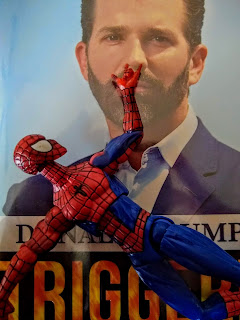 “He’s stringing them together like a necklace that members of his tribe can wear in order to recognize one another.”  ~me, from before


This was a tougher one to write than I thought it would be. First, there’s the sifting through all the posturing and braggadocio. Most especially, how hard he doesn’t run from a fight.


“He knew as well as I did that there’s no such thing as being “too hot” on social, at least not as far as I’m concerned. I consider myself to be a shit-talker par excellence.”

Then, it’s refuting the assertions piecemeal. I don’t have time for that. Somebody else does.

The “red meat” as it’s referred to by Lil D -- no doubt another shot at vegans-- of this chapter is stringing together: The Mueller report and subsequent testimony, the reaction of the “left” to the election of Donald Trump, and acts of violence or harassment suffered by people on the “right”  into what appears like a chain of causality stemming from irrational hatred of all things Trump. Political distinctions of victims in these tales of Antifa and woe, predictable as they may be, aren’t really important. These are people on the Trump family’s side. These are people perceived as close to Trump, even if only politically.

Trump’s voters are presented with an unspoken equivalency. They are under attack from “the left,” “leftists,” “the radical left,” and “Democrats.” Though he, in a thus far uncharacteristic backpedal, states that some Democrats are good people.

Now, I know I made a bit of a leap back there. I took a leap from the attacks, physical or otherwise, endured by people close, in whatever way, to Donald Trump and turned that toward Trump voters. Early in my notes, after reading a particularly pungent bit of chest-puffing regarding the release of the Mueller report, I grabbed this quote:


In my notes, I saw this was the second time he’d invited the reader away from his lovely pages and wondered if he was insecure. Well, I mean, he is. The non-stop alpha male chest-beating prose tells you know that much. He’s making one last attempt to kick out the uncool kids by appealing to their sense of revulsion at his personality.


"Also, if you find any of the following even remotely offensive: patriotism, masculinity, hunting, MAGA hats, the american flag, guns, religion, Roseanne Barr, criticism of stupid ideas, capitalism, skyscrapers, or the use of the word 'Christmas' during the Christmas season, then you should definitely stop reading."


He’s been identifying exactly to whom he’s talking. The insults serve to obfuscate and confound those not in the special group of cool kids. Cool kids to whom those type of insults are of the water-off-a-duck's-back varietal. Cool kids that are also the subject of vicious and violent bullying. This is where he, a man of wealth, power, and status, aligns himself with the inner children of the outsiders. Or, more specifically, those who consider themselves outsiders.

Posted by SinisterPurpose at 9:41 AM

The travel addict inside you is craving for new adventure? Things to do will suggest you the new destination for your next journey with all the best spots around the world.